To conclude our celebration of 75 years since Arclight Bowls Club was originally formed our President Neil Crockford invited both current and passed members to join him for a social day of bowling.

Thirty two current members plus an assortment of past and life members spent the afternoon at our green at Eudo Road.

After an initial introduction by Neil, the members enjoyed a spider which was won by Phil Haselton, this was then followed by a typical drive of 4 matches of 5 ends each, after much enthusiasm by all, the event was won by Peter Leatherdale with Denise Gosling in runner up position.

The event was concluded with a light buffet which was much appreciated by all, this was followed by a note of appreciation to Neil given by Mike Stevenson on behalf of all those present. The bar was closed by Jack in early evening after a very successful afternoon. 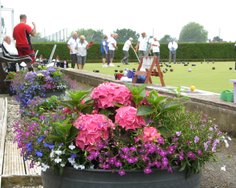 Our first celebration match took place on Thursday 17th June, as planned, despite the inclement weather during the preceding 24 hours. The gods were with us for the match to be played starting at 14.00. The rain held off to allow 5 rinks of triples to play 15 ends.

Sadly our President Neil Crockford  was unable to attend, so on his behalf Mike Stevenson welcomed the CBBA President Danny Bonner and his team from various local club's including Mersea Island, Severalls and West End to join with us to celebrate the special event.

A close fought match followed with CBBA league team eventually winning by 10 shots overall 67- 57, most rinks were very close with only the odd shot between each team.

On conclusion of the match a short presentation took place to the team of triples with the best win of the afternoon, which had been donated by Neil Crockford, the winning trio was from West End ( Robin Piggot, Paul Hubert and Martin French).

Whilst the event that took place was not what we would have planned for pre Covid, it was satisfying to meet with other local bowlers to celebrate the event. Thank you also to Arclight members who played on the day and to others who helped out both before and on the actual day of the event.

Our second celebration match took place on Friday 2nd July in glorious sunny weather. Trevor Carpenter welcomed all participants which included teams from Boxford, Colchester and West End to join with us to celebrate this special event.

Arclight won convincingly on all 3 rinks with an overall match score of 76-23. A short presentation took place at the end of the match to the best winning team which was Jill Dyer, Dave Marshall and Richard Nicholson.

Thanks were given to Arclight members who played on the day and to others who helped out.